Nowadays, there are two prominent display technologies: LCD and LED. There is a considerable amount of confusion and misunderstanding about these two technologies and choosing one between them sometimes can be a tough choice because of the unclear perception.

However, we often meet these two technologies in daily life when you selecting computers, phones, displays, etc. So let’s clear that difference up then have better chances!

Before we discuss the differences between LED and LCD, you may need to understand one term: “backlight.” That can help you understand them easier and better. We will discuss this next.

1. Why Does LCD Display Needs A Backlight?

Just as the name suggests, LCD (Liquid Crystal Display) contains a liquid crystal which will change state when current is applied to it, and the liquid crystal is sandwiched between two plates. If you want it to light up, there should be a light behind it cause it emits no light of its own. The light is what we call “backlight”.

For further understanding, a backlight is a form of illumination used in liquid crystal displays (LCDs).

As LCDs do not produce light by themselves, they need illumination (ambient light or a special light source) to produce a visible image. You can imagine the LCD panel as a sandwich with different layers.

First, you have a polarised filter, then you have a protective layer, followed by the LCD sheet, and then a backlight at the back. 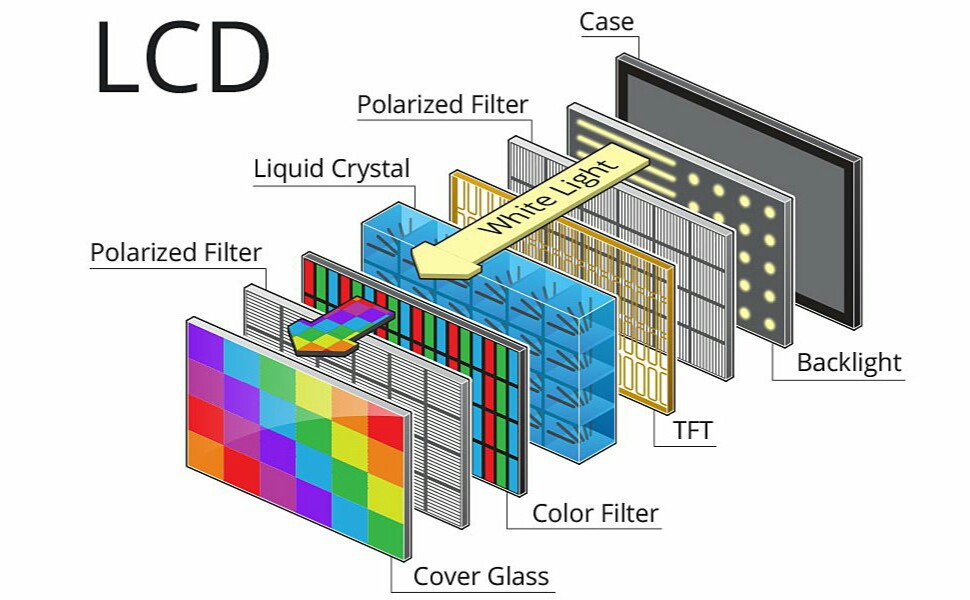 LCD (Liquid Crystal Display) is a type of flat panel display that uses liquid crystals in its primary form of operation. Since LCDs cannot emit light themselves, a backlight is usually placed behind an LCD screen to be seen in the dark environment.

In short, LCDs are illuminated by a backlight and pixels are turned on and off electronically, while liquid crystals are used to rotate polarized light.

You can easily to understand from the picture above: a polarizing glass filter is placed in front of and behind all pixels. Between the two filters are the liquid crystals, which can be switched on and off electronically.

There are four types of LCDs:

2.The Differences Between LCD and LED

There are many differences between LED display and LCD display and both two can be an option for a variety of application sites. To determine the best one for our projects, it is critical for us to understand exactly the advantages, limitations, and differences to determine which one can be better in a given situation. We should compare them not only in the aspect of cost, but also other factors such as sizes, brightness, contrast, durability, clearness, vibrancy, and many other features.

2.1 What Is LED Display Screen?

The full name of LED is Light-emitting diode, and it provides its own light. It has been widely used for virtually all display installations, both indoor and outdoor. In the digital signage industry, LED display screens now have become mainstream.

The brightness for LED display boards ranges from hundreds to thousands and is much higher than that of LCDs. Even under direct sunlight, LED screens can display images clearly while LCDs are susceptible to ambient light. Inappropriate ambient light may render the picture unviewable.

Power consumption is one of the most concerned points, and the ratio is about 10:1 compared with LCD. The comparative lower energy consumption is because of the structure of these two displays.

LED display has a wider viewing angle which can up to 160°to ensure people can see the images clearly from different angles, whereas that of the LCD panel is more limited and narrower.

LED displays can convert electrical energy to optical energy, which contributes to a higher refresh rate, thus better performances in displaying videos with less latency and unwished situation such as ghosting, and also higher resolution and wider color gamut.

LED display panel can change the light intensity in a extreme short time, so it has local dimming according to the requirements, for instance, the dark images can be even darker through controlling the brightness of partial screen.

With such features, the contrast ratio can be much higher than that of LCD. The high contrast can increase the visibility in different weathers and environments, for example, even in the daytime with strong sunlight, outdoor LED display can still have excellent display performance. 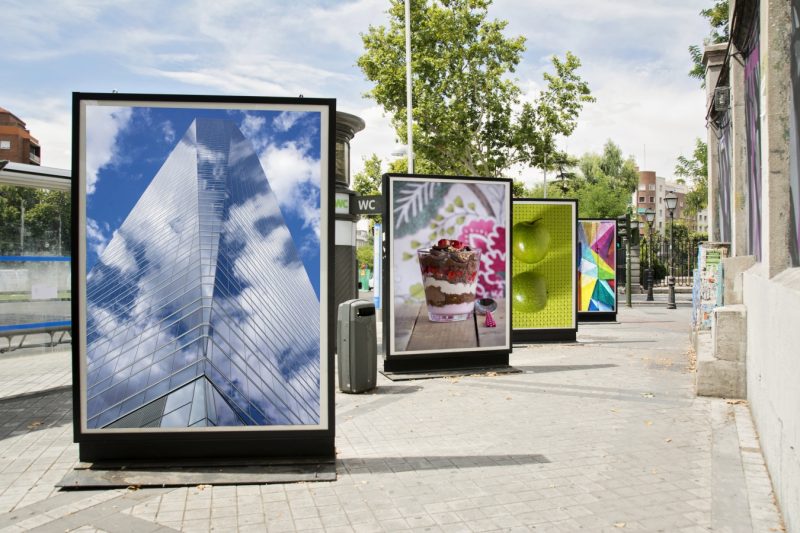 Full-color LED display has a wider color gamut so it has less color distortion and more vivid expressive force.

LED displays are more friendly to the environment than LCD as the lighter weight will consume less fuel when delivering, and because LCDs contain a small quantity of mercury so will result in more pollution after discarding. Besides, LED display panel consumes less energy and the longer working lifespan also reduces waste.

LED video walls are one of the most popular display ways to use in various applications such as entertainment venues and various retail spaces.

LEDs are typically the preferred display for video walls. LED video wall has excellent uniformity and the widest viewing angles with seamless, no bezels appearance.

And single LED display board can be easily installed together into one large LED wall, which will save a lot of the labor cost and time cost. 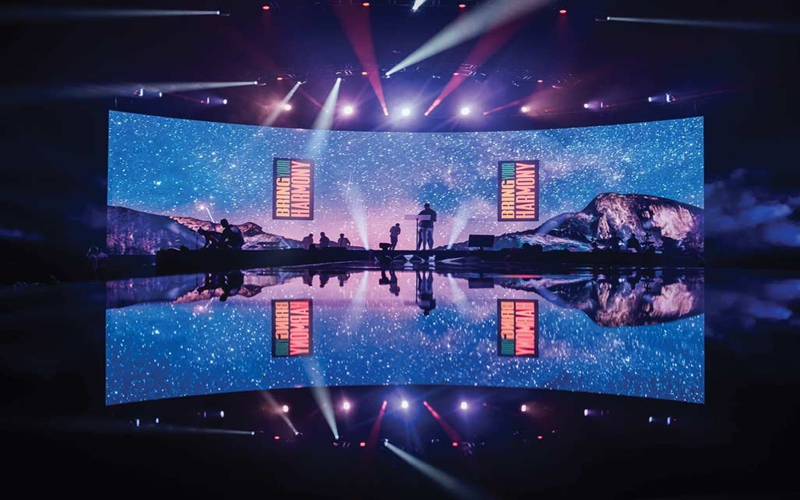 LCDs can be tiled, but their bezels cause gaps and visual barriers. While there are LCDs with narrow bezels, small seams are still visible. Thus it is not an ideal choice given such a condition.

The possible higher initial price point: as the more complex production process, more durable quality and is released later than LCD panels, the initial price point of LEDs can be higher. But there is one thing that deserves to be noticed, the lifespan is longer and the future maintenance fee can be lower with high adaptability to different application scenarios. So in the long term, choosing a LED display may save you more money.

LCD stands for liquid crystal display. As what has been mentioned above, LCD doesn’t produce light directly, it has a backlight to help to produce images. LCD displays are usually used in the indoor environment and the ambient light is often limited and controlled.

Due to LCD has been in widespread use since the early ’70s where it first appeared in digital watches, the cost has been reduced so the price can be lower.

LCD monitors tend to have better viewing angles and anti-glare than edge-lit LEDs as if you like to kick back in your chairs or view the screen from different angles, because the edge-lit LED may lose visibility as you move away from the center viewing angle (please notice the full-array LED monitors don’t have such issue so it is the best choice for gaming).

1.Thicker and heavier structure because of the different backlight. There are two methods of LED backlight: direct and edge. The main advantage of edge lighting is that it can be used to make LED screens incredibly thin cause the LEDs are at the side and not behind the screen.

2.Many monitors can not support 4K. Nowadays, 4K videos are one of a trend, however, many LCD displays can not load such video sources so there are more limitations on the content.

3.More energy consumption. As compared with LED display of the same size, LCD may consume 20% to 50% electricity more than that of LED display screens.

4.Lower contrast results in a less clear image. As what we have discussed above, LED display has special lighting methods that can increase the contrast to display pictures more clearly.

This article introduces the differences between LED and LCD, and the advantages and disadvantages of both. When you try to make the best choice for your project, consider these different features carefully.

Generally speaking, an LED display holds advantages due to many functions it has, such as longer working life, lower consumption, easier maintenance, better display performance and so on.

These qualities contribute to the higher initial price point, while in the long run, the investment may be more cost-effective. But if you are looking for something cheaper just without many requirements, that may have you considering the LCD.

In short, price should not be the only, or first factor to consider which one to choose, but considering them based on our exact needs.

Retail LED Display Board for Shop: Product and Solutions Here!

2022 LED Screen for Church: Products, Price and Advice All Here!

25 Important Points of Pole LED Display You Must Know!

How to Buy LED Display Screen? (2022 Guidance for New Importer)