During the daily operation, some customers will find that the full color LED display screen sometimes will go cyan, which is a colour distortion phenomenon. It often happens when we put the display under full white.

To figure out what is the key issue, we need to have a basic conception – mostly, the cyan color cast is caused by heat effect. So what is heat effect? You can easily get the answer literally, heat effect means overheat of LED screen and its inner components.

Especially with the  pixel pitch of LED module, the density of LED lamp beads and inner components increases all the time, leading to accumulated overheat inside, then sometimes we will get this color distortion. 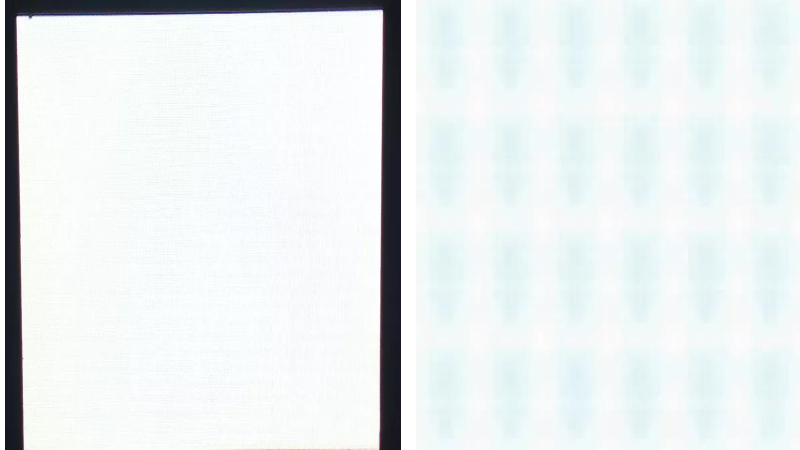 The reason of why the screen show cyan but not other colors under such situations is mainly because of the structure of LED display screen.

We all know the concept of RGB – red, green, and blue, and one LED lamp bead of a SMD LED display will contain these three colors, which we call three primaries for humans.

Now you may already have some ideas on your own – why the screen sometimes will turn cyan? That may be caused by “minus red” because when we mix green and blue, we will get cyan!

A very easy conception, right? Now you have understood the reason for turning cyan is due to the unbalance of three primaries.

However, why will we get “minus red” but not other results? What are the effects of temperature on the three colors?

When Will We Get “Minus Red?”

As you can see from the picture shown below, the output efficiency of the red light is most sensitive to the environment, the next is green, finally is blue. Output efficiency of brightness is the value of LED lamp beads at a given temperature. 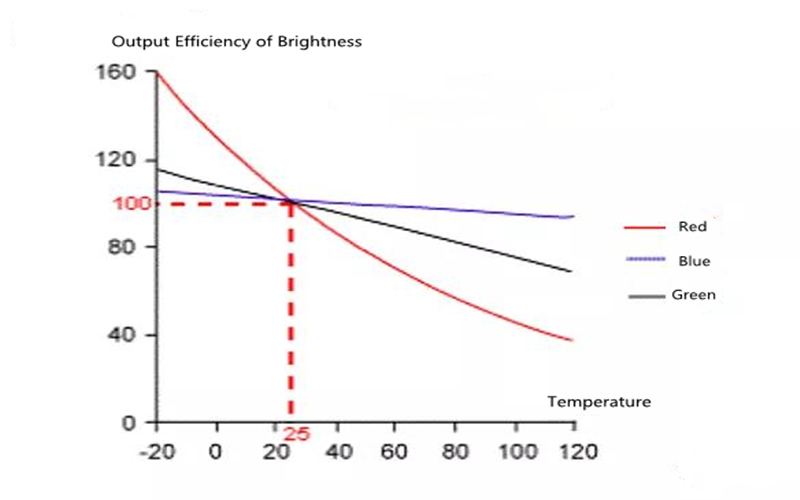 In this picture, we can notice that when the temperature is over 25°C， the output efficiency of red light decreases rapidly, and that of blue light and green light are comparatively modest.

Therefore, there are two conclusions we can get:

(1) With the temperature rising, the brightness of LED lamp bead will decrease.

(2) The losses of the brightness of the three primaries are different, and red light will lose the most.

This is the key point laying behind the color distortion – just like we have mentioned before, when the ratio of red light is less, we may get cyan finally.

How to Deal With Turning Cyan of Full Color LED Display?

Before we talk about the topic of this part, we need to figure out what elements will influence brightness of the LED lamp bead.

There are two elements related to this, one is output efficiency of brightness, which we have discussed before, and the other is actual current.

You may guess, whether we can change output current of the driving chip and current gain to control peak current, so as to change the actual current? Unfortunately, we can not control resistance and current gain well, and we can only target an area, but not a single LED lamp bead.

Moreover, if the temperature changes again, we will need to adjust the specifications again. Thus, it is not recommended to apply this method.

The output efficiency of brightness is the proportion of time a lamp bead is on in one second. If you adjust this value, meaning the three primaries will be adjusted at the same time. As a result, this way is impracticable.

Changing brightness percentage refers to changing the ratio of red, blue, and green light. When the full color LED display turns cyan, you can improve the ratio of red light or decrease the proportion of blue and green light of a single LED lamp bead. That seems the most suitable way for us to improve color distortion of full color LED display screen, right?

However, it still can not address the randomness of the ambient environment, meaning if temperature changes, you will have to do the corresponding adjustment again.

But do not worry about that, because the working temperature of both indoor full color LED display and outdoor LED display will be comparatively stable. Just adjust the screen to the normal situation, and things will be less then.

If the ambient temperature can not be lowered to a normal level, thermodynamic correction will be a good choice.

In this article, we talked about the reasons for full color LED display screen turning cyan and corresponding methods of dealing with it. Generally speaking, displays going cyan means there is excessive heat, and overheat will lead to minus red ratio of LED lamp bead. Thus, the article explores principles laying behind it, and lists three potential measurements.