LED Display Connection? The Most Simple and Useful Guidance!

Home » LED Display Connection? The Most Simple and Useful Guidance!

How to connect LED displays and what is the logics behind LED display connection? What is the structure of LED control system, and how to calculate how many LED cabinets can be loaded by our LED controller?

In this article, we will talk about the fundamental knowledge of LED display control system – some basic but essential points for every LED display screen owner and provider should know. We will discuss the overall structure of LED control system, how to calculate loading capacity, and the LED screen connection logic in a simple manner. Now, let’s get start!

1.What Is LED Display Control System?

2.2 Number of Cabinets Can Be Loaded

2.3 Do We Have Different Loading Capacities of Each Output Port?

5.What Is the Logic of LED Display Cabinet Connection?

Warm up - How LED Displays Come from?

Before we understand what is LED control system, let’s know the structure of LED screens. As you may know, LED display module is the smallest unit of LED cabinet, meaning the cabinet consists of several modules according to certain rules.

And then , the LED display will be composed by a certain amount of LED display cabinets. Now, have you understood how the LED display screens come from? The logic is simple: LED module, LED cabinet, and finally LED screen! We have the screen now, so how to display images on it? To achieve this, we should build up our LED control system.

What Is LED Panel Connection?

When we come up LED panel connection, we often need to do the work of cable connection, signal connection and LED cabinets, modules or display connection!

Doing this, we need to know the connection logics, how to calculate parameters and operation of corresponding LED control software.

In the following content, we will discuss them steps-by-steps. Of course, all the contents will be easy to understand. Just read the post until to the end to get these information that will definitely help you.

1. What Is LED Display Control System?

The basic structure of LED control system will be described below:

Moreover, there will be signal cables such as HDMI/DVI/DP to connect the computer and the controller so the video signals can be transmitted.

Then we will connect the LED screen wall with the LED video controller through Ethernet cables by different output ports. Then, we can get the basic structure of common LED display control system!

However, there is other cases which involves a component we often hear about – LED video processor.

But if we want to display the entire image, what can we do? In this case, we can introduce the LED video processor to the control system, which will adjust the source resolution to 700*500!

After changing the video source, the entire image can be completely showed on the display as below.

Now the LED display control system structure will be like this:

The functions of LED screen processors can be listed but not limited to:

LED display screens can only show the images whose resolution is compatible with that of the screens. As a result, when the video sources resolution is bigger than screen resolution, the images may only be showed partly.

The video processor for LED screen can make the images be performed completely on the screen regardless of the original image resolution.

(2) Conversion and switching of signals

Because the pixel pitch of LED displays is much larger than some other kinds of displays, therefore, the industry has put forward higher requirements for the image processing technology.

As LED screen industry has already ushered in high-definition and giant size era, the physical resolutions of LED screen wall sometimes are huge.

LED video processor can deal with the splicing function to drive the LED walls with large resolution in an cost-effective way.

LED video processor can deal with multiple same signals or different signals, thus having the capability of multi-images processing.

When we are talking about the loading capacity, we only focus on the pixel level (the total number of pixels).

So, how to get the cabinet resolution? To calculate this, we should know the cabinet dimension and pixel pitch.

You may have figured out the formulas by yourselves already:

Now we have obtained the cabinet resolution 256*256, so how many such cabinets can be loaded by one output port?

Now let’s do the practise:

2.2 Number of Cabinets Can Be Loaded:

For each output port, the loading capacity is 650,000 pixels:

So each output port can load 9 cabinets.

2.3 Do We Have Different Loading Capacities of Each Output Port?

You may want to ask: is the loading capacity of each output port of controller is a fixed number as 650,000 pixels? The answer is no. We can figure out different values when we have different conditions.

So we can calculate the capacity as:

PS: for the definitions of RGB, frame rate and other LED display terms, welcome turn to this article: 30 Frequent LED Display Terms

But if we change the values of color depth and frame rate, you will get different values. In this table, we list some common situations:

Please notice when the color depth is 10bit or 12bit, we will take the value as same as 16bit.

For instance, when the color depth is 10bit, frame rate is 60Hz, we can calculate the capacity as:

Now you have already understood how to get the loading capacity when given frame rate and color depth. Just do a little practice by yourselves, and self-check the answer according to the table!

Take the most common used input single link DVI, and the largest resolution for single link DVI is 1920*1200 generally (sometimes we will customize the resolution but the maximum value is this), meaning the max resolution is 2,304,000 pixels.

This is why for LED display controller with 4 outputs, the max resolution is 2.3 million pixels. In short, it is because the limitation of input resolution.

Here we list the max height resolution and width resolution for different Novastar controller modes. After knowing one of them, you can calculate the another one.

For instance, for MSD300, the max width is 3840, so the corresponding height should be:

After knowing the concepts of LED control system and loading capacity, we can go on to the next chapter – LED screen connection logic.

5. What Is the Logic of LED Display Connection?

Take a customer case as the example: for each cabinet, the resolution is 192*384, the screen is 10 columns * 3 rows, so the screen resolution is 1820*1152. The controller mode is MCTRL600 and system running 60Hz. For the LED panel connection, this customer arranged it like this initially:

Now, we take this chart as the simplified screen connection diagram (10 columns, 3 rows):

That means, no matter how many cabinets you connect, seven or eight, the loading capacity will be considered as the same with that of nine cabinets. 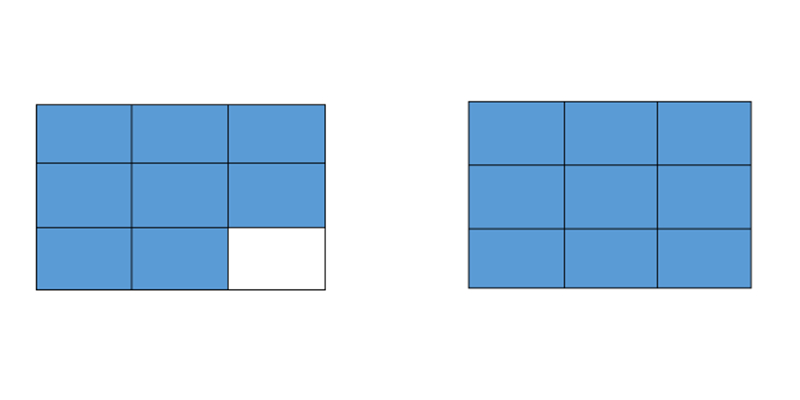 Therefore, how can we get the right answer? Just do the LED panel connection like this:

This case tells us the LED screen connection should both take the number of cabinets each port can load and the connection logic into consideration. Please remember the area for one port should be completely rectangular.

Moreover, sometimes the length of cables is one of the determined factors, too. For some companies who equipped cables with specific lengths, even the area is rectangular, and the loading capacity is enough, the connection may not be achieved due to the limitation of lengths of connecting cables.

For instance, some companies will suggest the screens to be connected in some certain ways as much as possible because of the limitation of cables.

Under this circumstances, just ask technicians for the connection methods which both consider the limitation and the other two preconditions.

Next, let us do a little practice to help you understand this knowledge point better in an straightforward way.

Question: (1) the resolution of each LED screen cabinet is 128*384 pixels, the screen is 8 columns and 4 rows. (2) We have a Novastar MCTRL600 whose loading capacity is 2.3 million pixels. (3) And the lengths of connecting cables for right to left and top to bottom are 60cm and 80cm separately. How to arrange the display connection?

You get your simplified graphic of this LED display screen like this:

First, we need to calculate the screen resolution:

Second, we will calculate the number of cabinets each port can load:

Please notice there are two preconditions:

(1) The area of calculating the total loading capacity for one port should be rectangular;

(2) Lengths of cables we have.

Finally, we can get the screen connection diagram showed below:

Don’t forget the limitation of cables makes some connection methods can not be achieved. For instance, screen connection like the simplified graphic showed below is not supported:

Now, have you already known the LED display screen connection logic? If you still are a little bit confused, just do the practice one more time, and we believe you can understand this knowledge point well!

In this article, we mainly discuss three points:

They are not complex, and we believe you can learn them well after doing some practice following these articles. For more useful, practical knowledge about LED display control systems and LED screen connections, indoor LED display and outdoor LED display, just follow our LED FAQ section and we will post the related blogs for you regularly!