What Happens When LED Display Meets the “Metaverse”

Home » What Happens When LED Display Meets the “Metaverse”

2021, the first year called “Metaverse“, and the Metaverse will be popular in the capital and technology circles. Enterprises may strengthen the layout of the Metaverse, or announce their entry into the Metaverse.

On December 26, 2021, Metaverse also successfully made the list of the top ten keywords for A shares in 2021 released by the Financial Associated Press, and its attention is evident.

On the other hand, the Metaverse is also gradually gaining policy attention.

The Shanghai Municipal Commission of Economy and Information Technology clearly stated in the “14th Five-Year Plan for the Development of Shanghai Electronic Information Industry” that it is necessary to strengthen the forward-looking research and development of the underlying core technology and basic capabilities of Metaverse, and promote the development of new terminals that deepen perception and interaction and systematic virtual Content construction, explore industry applications.

And this is also the first time that Metaverse has been written into the local “14th Five-Year Plan” industrial plan, and other provinces and cities are expected to follow.

At present, VR/AR devices are well-known entry-level terminals for human beings to connect to the Metaverse, and the immersion of VR/AR devices comes from higher resolution and refresh rates.

In contrast, augmented reality is the application direction of large LED screens in the metaverse era, but only some people will associate it with the metaverse.

On December 4, 2021, Shen Yang, executive director of the New Media Research Center of the School of Journalism, Tsinghua University, bluntly stated at the “China Development High-level Forum Young Entrepreneurs Summit”, “Many people understand the metaverse as a virtual world, which is undoubtedly a misunderstanding. Read, they’re ignoring the augmented reality metaverse.”

In fact, the virtual and real world created by the large LED screen has a broad application scene no less than VR/AR equipment at the current level of technology.

With the impactful visual experience brought by the stereoscopic picture effect, the naked-eye 3D LED display will heat up rapidly in 2021 and be widely used in many scenarios, including shopping malls, tourist attractions, and major celebrations.

In terms of shopping malls, naked-eye 3D is mainly based on urban landmark buildings or commercial buildings, relying on huge naked-eye 3D large screens, combined with immersive creative content expression, and has become a new way of displaying brand and city image promotion.

Among them, the Huawei Smart Living Pavilion integrates multiple elements such as fashionable architectural design and future quality life experience, while the 555㎡ 3D LED atmosphere screen created by Leyard showcases the charm of technology in the form of naked-eye 3D through a giant transparent LED screen.

It is reported that due to the long construction life of the building, Absen carefully selected the ultra-thin 10,000-class high-brightness and energy-saving P16 products to ensure safety and stability, and ensure the service life. 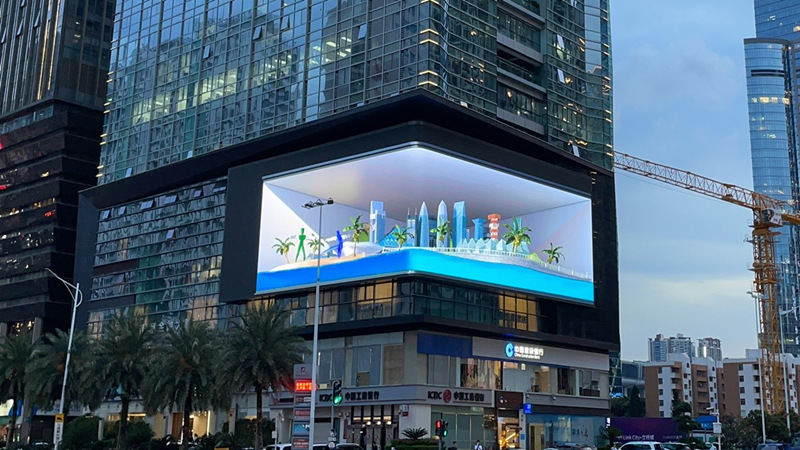 In terms of tourist attractions, on December 18, 2021, the largest naked-eye 3D cultural relic in the Forbidden City will be exhibited at the Shenzhen Sea World Culture and Art Center.

The naked-eye 3D cultural relic is 5.3 meters high, and the cultural relic is enlarged by 22 times high-definition, presenting the precious achievements of the digital Forbidden City, and experiencing the details that cannot be felt in the physical exhibition.

Glasses-free 3D technology has also frequently appeared in major celebrations. On July 1, 2021, on the occasion of the centenary of the founding of the Communist Party and the 24th anniversary of the return of Hong Kong, the 3D Yaowei Harbor-themed light and shadow show was created by Unilumin Technology was performed in Hong Kong’s Tamar Park.

Unilumin’s integrated light-display solution of “hardware + software + content + interaction” has made the light and shadow show a great success, and this is the first time that naked-eye 3D has been used in a major event celebration.

In response to this trend, Kinglight has launched the Kinglight Outdoor Raptor family, including high-end KS series, conventional A/S series and other lamp bead products that meet the needs of outdoor LED display.

Nationstar has also launched a new generation of products such as glasses-free 3D.

REESTAR, an independent high-end brand of content technology, has jointly created a number of naked-eye 3D models with upstream and downstream enterprises.o

XR virtual shooting: what you see is what you get, the cost reduction technique of film and television production

XR virtual shooting is developing at the right time.

The production team saves a lot of costs in travel, set, post-production and other links, and the actors can directly interact with the virtual scene.

What you see is what you get, which greatly reduces the difficulty of interpretation. It is a very friendly film and television shooting method.

The first film that uses LED technology for virtual shooting is “The Mandalorian”. The virtual studio used in this film is provided by ROE Radio, a subsidiary of Unilumin Technology.

On September 3rd, 2021, Unilumin Technology also signed a strategic cooperation framework agreement with the China Film Museum. The agreement not only expands the in-depth cooperation between the two parties in the film industry, but also promotes LED companies to more actively participate in the wave of film digitization. 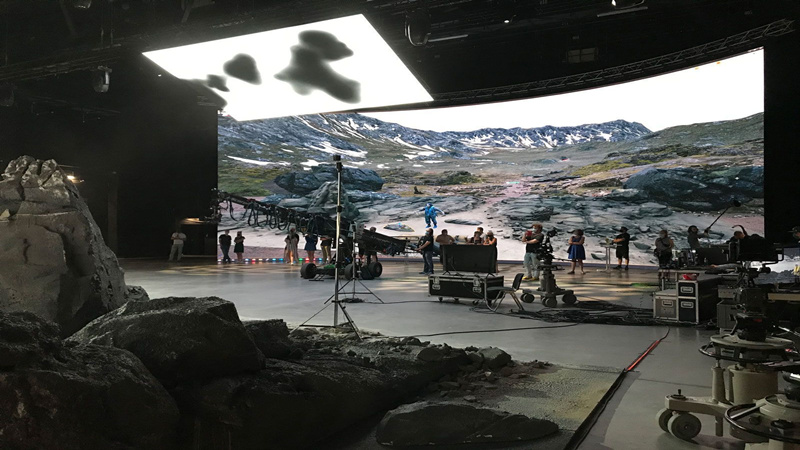 In addition to film and television production, XR virtual shooting can also be applied to virtual studios, as well as virtual activities such as online concerts and product launches, bringing online activities with a strong sense of presence to the audience.

On the eve of the two sessions in 2021, Dahooo Technology, a subsidiary of Leyard, built an “immersive intelligent studio” for Xinhua News Agency.

The studio used the Dahooo AR immersive studio system and the floor tile screen provided by Leyard Linso Technology to overcome the obstacles of the screen and the distance of the space, and launched an interview of “different places on the same screen”.

In addition to launching XR film and television shooting solutions in 2020, Alto Electronics will also set up a subsidiary, Creative Digital, in early 2021, dedicated to providing customers with professional naked-eye 3D, creative visual presentation and interactive applications and other content products and services.

In the first half of 2021, Creation Digital has reached a strategic cooperation with Youliang Culture, a well-known short video MCN agency in Shenzhen.

The two parties agreed to jointly build an XR virtual live broadcast room to explore the application of XR technology and creative content in the short video field.

Immersive experience space: the fusion and collision of culture and technology

The fusion of culture and technology brings a multi-sensory comprehensive experience , allowing the audience to deeply feel the charm of the Metaverse.

The immersive experience space uses multiple LED screens to create an immersive virtual simulation demonstration environment, allowing the audience to have an interactive experience in a physical space where virtual and reality blend.

For example, at the LED CHINA 2021 site, Xin Caichen brought an earthquake safety education experience hall. The experience hall uses the LED screen combined with the sofa vibration effect to bring the audience to the earthquake scene, understand the knowledge of earthquake escape, and improve the self-protection ability in the disaster.

Although the construction of the Metaverse is in full swing, as an emerging industry and a sunrise industry, there are still many problems in the Metaverse.

Internally, although there are many concept stocks related to the Metaverse, the core enterprises have not yet been identified, and the number of supporting enterprises is relatively small.

Externally, the metaverse system is huge and requires huge amounts of capital, but the lack of policies and the imperfect supervision system also affect the construction of the metaverse.

The uncertainty of the future calls for the industry and the market to return to rationality and to view the development of the metaverse rationally.

At the same time, the infancy of the Metaverse also needs to be more inclusive, waiting patiently for the technology and ecology to mature. In this process, LED display screen will also integrate digital, intelligent, and scene-based technology with the advancement of technology, and become a great help in opening the door to the metaverse.